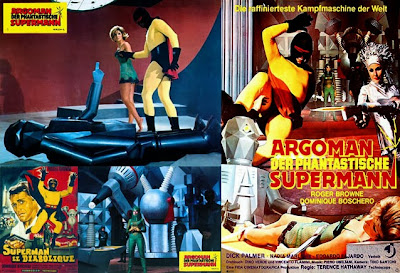 I Am A Very Curious Yellow

When a large budget movie production of the 1962 comic strip super-criminal Diabolik was announced, to be called Danger: Diabolik, it started off the usual Italian rush of bandwagon films even before it had gone into production... it had a very troublesome route to the screen is my understanding but, when it came to Mario Bava’s turn to sort it all out, things got rolling along nicely and we have the film as it is now.

However, because of the delays to Danger: Diabolik, there was a very unusual phenomenon occurring whereas a lot of the films made to cash in on the presumed success of the Bava movie were released a year or more before the original template movie. A very strange state of affairs.

Argoman - The Fantastic Superman, was one of these films.

The film stars the always strait-faced Roger Browne as one of Scotland Yard’s criminologist consultants, Sir Reginald Hoover. In reality, Hoover is really Argoman, criminal mastermind but all around nice guy who, as he tells his faithful manservant Chandu, possesses super-powers well within the bounds of known science... especially in the realm of science that deals with telekinetics (promise I’m not making this up guys and gals).

What does this mean?

Well... Argoman (or Sir Reginald to his friends) can, for instance, hold his breath underwater for 33 minutes. He could probably have stayed down there for longer but, as he says, it gets boring down there.

And it means he has psychokinetic powers to catch a passing girl’s mind and make her steer her hovercraft (yes, you read that right, hovercraft... with greatful acknowledgment to the Isle Of Wight apparently) towards his beachside lair and then levitate her backwards through the air to him so he can entice her into a game where, if he wins, he gets to bed her. “I adore your emeralds” she says to him, after they’ve had a hot, sexy session.

Luckily for us, we’re clued in as to when he’s practicing his telekinetic powers by the subtle visual clue of having eyes that glow green while he is exerting his facial muscles or employing his thoughts as a voice-ever effect on the film. It’s a lot like Village Of The Damned in that respect except, you know, a lot less well executed.

What all of this also means is that we have an Italian production set in London and Paris which rumbles along like a Derek Flint movie on acid. It’s seriously loopy and groan-worthy. Honestly, if it was any more camp the audience would be pitching tents to watch the thing. And, goodness gracious me, the amount of unbelievable exposition in the movie is beyond compare... especially in the scene where they’re talking about the big diamond the French government has in its top secret echelons which can, basically, turn stuff all bendy when light is refracted through it and directed at an object.

Anyway, the movie opens in England with shots of the Queen’s Guard marching around in formation and Piero Umiliani’s stab at British brass band stuff. Now I like Umiliani... one of his most famous cues, Mah Nà Mah Nà, from the sex film Sweden: Heaven And Hell, was even strangely procured by The Muppets and has since become a phen-no-me-nal catch phrase for them. Here there is lots of cool n’ swinging “doo weee doo waaas” on the score but also, some very unintentional laughs. He goes for Englishified sounding stuff when the movie is set in England and the French national anthem kinda stuff when in Paris, for example, to set the tone. However, being an Italian film, nobody told them that various establishing shots of Scotland Yard Headquarters in London should not be scored by bagpipes. Oh yes... he gives the famous London police bureau some nice Scottish notes.

Okay... back to the plot. We find out very early on that Argoman has a specific achilles heel and it is this. When he has sex with a woman, he loses all his uncanny superpowers for six hours. Why this happens is kept as unclear as to why he possesses these superpowers in the first place, to be honest, but hey... I guess he’s a modern Samson or something?

Anyway, after the self styled Jenabell, Queen Of The World (as it says on the looped audio track, smoothing over the hastily written Italian-English note which says that she is Queen Of The Worls), has stolen the crown of the crown jewels from the Tower of London by getting a Queen’s Guard to smash and grab it and hide it under his incredibly tall, furry hat (known as bearskin)... she returns it and demands the big diamond thing I told you about a few paragraphs ago.

Things are not good... especially when she does all this when Argoman (who seems to also want to stop Jenabell and help out his Scotland Yard colleagues) has just made love to “passing hovercraft girl” only a few hours before... thus rendering his superpowers superfluous.

But wait... what’s this? Turns out hovercraft girl was really Jessabel all along, getting herself levitated for sex so she could render Argoman inconsequential when she is performing her nefarious schemes! But it’s okay everybody! Because, after the two of them spent time practicing their superpowered lovemaking techniques on one another, she made the mistake of smoking one of Argoman’s radioactive cigarettes, which he presumably keeps in his extra special lair for just such an emergency. This means, hooray, he can find her location with his special geiger-counter ring. Ha! In your face Jessabel.

This allows Argoman to change into his ludicrously yellow costume, with it’s “billowing but tiny enough so it doesn’t get in the way and snag on something” red cape and infiltrate Jenabell’s headquarters, rescue another of his regular lady-friends from the clutches of Jenabell’s big n’ clunky killer robot and beat up loads of people by just punching them a little and watching them spin away from the impacts in an unbelievably acrobatic and spectacular fashion (seriously people... campier than Adam West’s Batman TV show).

Of course, this all relies on Jenabell’s black clad henchman failing to carry out her special plan should Argoman penetrate her hidden lair with the same enthusiasm he penetrated her special lady parts earlier in the movie. And when she takes her two main henchmen to one side it becomes obvious how well it will do. Here is the plan that she shouts at them in her moment of stress... “Do as I told you! Kill him! Kill him, I said!” Oh yeah, subtlety definitely rules in Jenabell’s super-villainess lair.

And that’s about it really. The film is fairly nicely shot (well it is an Italian film, they’re masters at this kind of stuff) and you will see twenty or more black clad, Dalek Invasion Of Earth 2150AD style roboman look-alikes, enter a public building without... we’re presumably supposed to believe... being noticed as anything conspicuous to the rest of the world outside the building. So that’s fun.

You’ll also see Argoman change into his costume, beat up a few bad guys and then jump ostentatiously out of a van with his arms and cape flapping shouting... “AHaaaaaaaaa!” Which is kind of worrying and probably says a lot about Sir Reginald’s mental state, to be honest.

Whatever, if you don’t want to see this brilliantly dire movie after the descriptions I’ve just put on the page here then you are either dead or a soulless, emotionless machine who doesn’t realise, yet, the simple pleasures of a really stupid and quite frighteningly ambitious on it’s budget movie like the incredible, diabolikal... Argoman - The Fantastic Superman. Miss it at your peril!