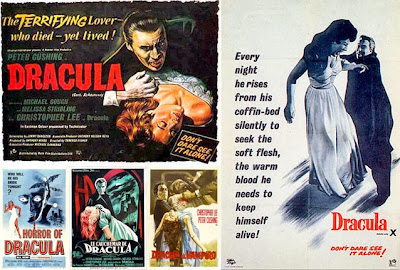 Warning: Spoilers may bite you in the neck...

Right. Before I get into this review, I want to state up front that this is not one of my all time favourite Dracula adaptations... although it would certainly be in my top ten (and possibly even make my top twenty vampire movies). My all time favourites would be the unauthorised 1922 version of Nosferatu: A Symphony of Horror (aka Nosferatu), the 1931 Todd Browning version of Dracula and the simultaneously shot 1931 Spanish version of Dracula which utilised the same sets but different actors and with some more interesting artistic flourishes than the Browning version (although you can’t beat putting Dwight Fry in a movie, no matter how good your direction is).

I do, however, have a soft spot for some of the Hammer films. The first Hammer movie I saw was when I was about 6 years old in 1974. I remember going around to my uncle’s house to see a television screening of Taste The Blood Of Dracula. This was a very important moment in my infant life because a) it was another Dracula movie I hadn’t already seen and b) my uncle had a colour television set. Colour! This was still a novelty for many people in the UK in the early seventies.

I remember liking Taste The Blood Of Dracula so much that, one year later, I started collecting the Shock Theatre bubble gum cards, along with all the other infant school kids, with their depictions of, often quite nasty and blood curdling, photographs from various Hammer Frankenstein and Dracula movies. I remember I never got to finish putting more than just over half of the set together because all the kids parents got wind of them and they were soon banned at my school. Trying to complete my set now, with an exorbitant amount of money being asked for just single cards, would probably be out of my price range, to be honest.

In the ensuing years, I watched the various Hammer Dracula movies as they came on television but I can’t quite remember when I saw this first one. I certainly remember going to a 2007 screening of Dracula at the National Film Theatre with my friend @cultofthecinema and being somewhat disappointed and, frankly, infuriatingly alarmed at the liberties that were taken with the story in this version... although I seem to have calmed down a bit about that now. Most movie adaptations are versions of the stage story of Dracula and, even when they’re not, most movie companies make absolutely horrendous changes to the tale (see my review of Dario Argento’s new version here for another take).

I was expecting to be a little disappointed on this subsequent viewing again, to be honest, but I wanted to see it because the new 2012 restoration includes shots taken from the Japanese release print. Long story, but there were usually a few different release prints of the Hammer films for different global regions (so I’ve always been told and this film seems to prove that) and the Japanese version would usually be slightly longer with more gore, to cater for the tastes of that market. So I was interested in seeing those few seconds of footage and, to be honest, to also see the new documentaries on this edition (of which, at time of writing, I’ve only been able to see the first featurette).

The added unexpected outcome of this viewing, however, turns out to be that it seems to have grown on me and the Hammer version of Dracula is a much better movie than I’ve previously given it credit for. I even like one of the things which critics have faulted it for but i’ll get to that a little later.

So... okay, as a straight adaptation of Bram Stoker’s original novel, the Hammer version, if you’ll pardon the pun... sucks. But, as a tight script which distills the essence of Stokers novel, cutting away huge chunks but also making some bold and sometimes quite canny changes to the story line in deference to both budget and timescales, it really isn’t a bad piece of economic writing and Terence Fisher shoots the whole thing with a certain panache, it has to be said.

One of the main things it’s got going for it is that the rhythm changes often take you by surprise and are quite emotionally manipulative. Now if I was being less kind or seeing it for the first time in a long time (and this may have been my problem with when I saw the BFI print back in 2007) then I might be overly critical for the film having what could be described as an uneven tone. But on this viewing I realised that those tonal shifts from sedate, long, tranquil stretches to sudden, intense moments of fury... notably in the scenes where Dracula catches his “bride” with Johnathan Harker and, again, with his final fight with Van Helsing... were actually quite deftly handled. Of course, you’ve got a wealth of good actors selling you the moments through their performance and able to keep up with those sudden emotional switches without having to pause for breath, but the way the shots are edited together, the whole tempo of those sudden rises to match Christopher Lee’s sudden bouts of animal fury or Peter Cushing’s sudden bursts into action is all marvellously well done.

Naturally, the music really helps and James Bernard’s score, which possibly sounds a little like his scores to the first two Quatermass movies in certain places (although that might just be me responding to his personal style of composition) supports this movie quite assuredly, matching the sudden bursts of ferocity with great cries of what I can only describe as musical chaos whenever the film suddenly shifts gears. I’m amazed the first of Bernard’s Dracula scores has never, at time of writing, been released on CD.

There are, as I said, a lot of big changes to the story. The swapping of Mina and Lucy and their relationship to Jonathan Harker, for example, will probably catch many people off guard. The cutting of Dr. Seward to an extremely minor role and the absence of his sanitarium and, indeed, of the Renfield character, might equally throw some people (I know it did me, back in 2007). Not to mention the location shift (due to budgetary constraints).

One of the more interesting changes is the fact that, rather than appearing at Dracula’s castle as an estate agent, Jonathan Harker is, in fact, Van Helsing’s fellow vampire hunter, and he is there to end Dracula’s life right from the start of the movie... under the guise of a librarian to help catalogue Dracula’s books. This also, of course, means you can call the Van Helsing character into the storyline fairly easily and rationally without having to jump through narrative hoops... you can cut a few corners in the story is what I’m saying here.

All of this makes a pretty good Hammer film, marred perhaps by the fact that the same set seems to keep being re-used and dressed to double for multiple locations. Something I picked up on back in 2007 and which further added to my disappointment at that particular screening. Reworking the sets is a skill still practiced to this day, of course (just go ask Ridley Scott), but I wish it hadn’t had to have been so obvious in this movie.

Still, I did enjoy this rescreening for myself and I even found Michael Gough’s performance, which is often attacked, to be quite enjoyable too. He has a certain chemistry in the role with Cushing, I feel, and I would like to see if they ever worked together again. It certainly doesn’t mar the experience for me... certainly not as much as the poor, overworked sets... colourful and brilliant as they are, shot from curious angles and lovingly plastered across the screen in some, nevertheless, beautiful compositions.

Colour me surprised but I certainly appreciated this screening of one of Hammer Studios’ most important films a lot more than the last time I saw it. It’s not as good as their excellent Dracula AD 1972, of course, but as Dracula movies go it’s really not a bad one. Bit of a classic. Miss it at your peril.
Posted by NUTS4R2 at 20:04