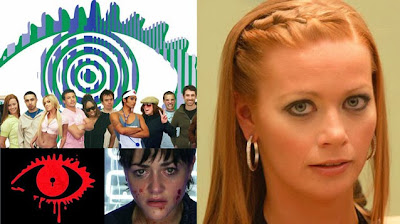 I never caught this mini masterpiece of zombie horror when it aired on British television, just 8 weeks after the end of the 2008 series of Big Brother. Mind you, I’ve sensibly never watched any Big Brother  other than for ten minutes at some point in its first series... which was ten minutes too much, for my liking.

I mention the so-called “reality” TV show Big Brother because the Big Brother house, and the show itself, is the main geographical setting for the majority of this five episode UK mini-series which ran for a week, finishing on Halloween of that year. It’s even got the popular Big Brother presenter of that time, Davina McCall, as the presenter of the show within a show in question and, also, uses a variant of the big eyeball logo which had somehow become synonymous in various guises with the show without me even knowing about it (yeah, I really went out of my way to not watch Big Brother).

Now, I was going to highlight the fact that I hadn’t seen any of Big Brother (outside those 5 - 10 minutes way back when) as a factor in telling you, before I start, why I’m not qualified to judge this show in terms of how realistic it is in comparison but, having now seen Dead Set, and realising it’s only trying to ape the show as a catalyst to a true horror entertainment, I realise that you really don’t have to know very much about Big Brother to be able to watch this show.

In fact, out of the five episodes of horror presented here, it’s only the first episode which includes any footage that follows the format of the Big Brother show, while simultaneously cutting around to various characters outside of the Big Brother house to get a real storyline going. We meet the horrible producer, setting up the, almost compulsory, human villain of the piece and played with nasty relish by Andy Nyman... as well as various characters played by lots of British character actors you’ll probably recognise, such as Jaime Winston, Jam man Kevin Eldon and Warren Brown. The two standouts for me were Adam Deacon (4 3 2 1, Anuvahood) and the brilliant Kathleen McDermott, who also starred opposite Samantha Morton in the amazing movie version of Morvern Callar.

I was really surprised by this show. It’s got some truly great suspense/horror build moments going on with it and, although the zombies aren’t all that scary (they rarely are these days, in various media), you do actually start to care about the fates of some of the characters because they are very well scripted and the actors are all pretty convincing in their roles. The pacing is brilliant and, unlike most zombie tales, it becomes much more than just a body count movie and moves right into the realm of actual horror. It’s actually got a very dark tone to it and that helps. The characters are pulled into the bleakness of the situation and the way that particular atmosphere is portrayed on camera and the nature of the events on screen, only gets grimmer and unrelentingly pessimistic the more the show plays out. There are some laughs to be had but these mostly come from the obnoxiousness of Andy Nyman’s character and the way he bounces off of Kathleen McDermott’s airhead contestant who, you start to realise, is actually more solid and reliable in her simplistic outlook than Nyman’s ruthless, get up and go shark of a TV producer.

The other thing which contributes to the horror is the sheer bravery of the goriness of a TV show. It’s heavy and mostly unremitting and is far stronger material than you would be likely to see in many movies banned by the BBFC over the years. If anyone wanted to highlight the sheer hypocrisy and “out there” nature of film censorship, then run this popular TV show up against something like, for example, an uncut print of formerly banned Zombie Flesh Eaters and you’ll find that Dead Set is far more into the flesh ripping, gut devouring, pull ‘em apart realm of zombie horror than Lucio Fulci’s classic 1970s horror opus ever was.

There are a couple of things which bothered me a little. The shooting style of handheld, react and follow/focus camerawork which was really taking hold around the time from TV shows such as the rebooted Battlestar Galactica is abundant throughout the production and, though it’s done well, it did seem to grate after a while.

The other thing I didn’t really like was the muggy filters used for the outside shots. I know why the director has used them, the interior scenes in the Big Brother house are supposed to be a contrast to the hazy grey feel of the outside world and makes the horror element, when it does invade the house, all the more visceral for its contrast against the “drabness” filtering... but I did find it hard to see what was going on during the exterior parts of the story and I would have preferred something a little less toned down, personally.

But, other than that, Dead Set is a neat addition to the zombie genre. Like the majority of films of this nature (and I haven’t seen The Walking Dead yet myself, due to censorship issues, but it probably extends to that too), there is no explanation as to why there is a zombie outbreak. It is what it is and this is, as always, a wise move because, not only does it allow you to jump right into the horror setting without having to build up a series of story incidents first, it also gives the characters something to talk and speculate about for some of the scenes, which is always a good strategy.

And, of course, there are the various nods to the zombie genre in general which I enjoyed. The opening episode which features a lot of TV studio activity while news channels are tuned to the approaching apocalypse, is a shrewd echo of the opening sequence of the original George A. Romero sequel, Dawn Of The Dead. Similarly, the final fate of one of the characters is basically a remake of the famous “pulling apart an important character while still alive and cursing” scene from Romero’s third living dead film, Day Of The Dead. The writer has even included a few sequences which harken back to the recent (very recent at the time this was made) reboot version of Dawn Of The Dead, with the characters standing on the roof and chatting while taking pot shots with a rifle at passing zombies. All very nice touches for genre buffs. I’m sure there are many more in there but, you know, I’m not a genre buff (nor a “buff” of any kind, thank you very much).

I was very surprised and taken by this TV mini series. Although it’s quite unflinchingly depressing in its moral outlook it is, nevertheless, a really good stab at making zombie horror relevant again and I think this show deserves more than to be forgotten and unwatched by people who like this kind of screen entertainment. It’s a very good take on an old chestnut and holds it rotting head and bony shoulders up high with the best of the big budget, cinematic specimens of the genre. Definitely a great one to watch if you are in the mood for a bit of Halloween horror but, beware, the violence and the language is quite strong at times.
Posted by NUTS4R2 at 20:57