A Colt Is My Passport 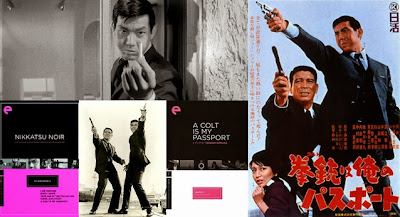 A Colt Is My Passport
1967 Japan
Directed by Takashi Nomura
Nikkatsu/Criterion Eclipse DVD Region 1
(as part of the Nikkatsu Noir boxed edition).

Warning: Reading this review is a passport to very slight spoilers.

The last in Criterion Eclipse’s astonishing collection of Nikkatsu thrillers, A Colt Is My Passport maybe lacks the shot compositional flair of most of the other movies in this boxed set (apart from one amazingly framed sequence where the main protagonist is waiting, sniper’s rifle in hand, to make ‘the kill’) but it more than makes up for it with the style of the camerawork in certain sections and, very much so, in the way the footage is edited.

The opening, for example, is a tour de force of style over substance. Following a credit sequence which utlilises a brilliant pseudo-Morricone spaghetti western scoring style of sound to great effect, we go through a scene where the main protagonist, hitman Shuji played by Nikkatsu superstar Jô Shishido, is being briefed and shown the details of his new target. The man hiring him provides a steady stream of narrative for the first few minutes over shots of him and Shuji following the target and being shown and told where the target will be over the course of the next few days (it is up to Shuji how and when he completes his mission for hire).

During this sequence the camera is not the steady glide or mesmeric static shot of many a NIkkatsu crime flick. Instead we have something which seems far ahead of its time, as I watch it now. The camera does all kinds of acrobatics to catch things and people as they are pinpointed by the voice over instructions to Shuji. It’s like the camera is looking around and then stops and concentrates on parts of the shot when it stumbles upon the correct piece of visual information. Normally, this is not the kind of shot sequence a studio of that period would have indulged their directors in, I would have thought. It’s very much a sequence of fast paced POV ‘camera reactions’ edited together in one big, narrative scoop.

This is something which I’ve noticed modern TV shows, especially in the science fiction genre, using to great effect nowadays (to the point where it’s become a cliché almost) but I can’t imagine the creative freedom to throw out the prescribed way of shooting these things could have come easy back in the late sixties in an environment like Nikkatsu. Shows like Firefly and the rebooted Battlestar Galactica tend to use this “taking you unawares” style of catching things out of the corner of the camera eye before swivelling around and focussing, quite frequently to help push the credibility of shots set within a fantastic universe, which would be less easy to buy into without this style of camera work. Artificial lens flares on the model and CGI shots seem to be another favourite nowadays. I find the fact that Takashi Nomura was able to get away with a similar sensibility in the first 5 or 10 minutes of A Colt Is My Passport very interesting. He must have been either a very confident director or pulled a lot of weight at the studio, is my guess.

This is one of the films where Jô Shishido’s star presence really comes through and helps to carry the movie... in as much as he is the main focus of the narrative and he manages to hold your interest by, for the most part, not doing very much. Shishido is extremely low key in this, showing neither emotion or interest for a great deal of the running time... although it does transpire that he is a big softie where friends and family are concerned (as these kinds of characters usually are).

Even though he doesn’t seem like he’s emotionally available for most of the film, it’s probably this kind of cooler than ice attitude which makes him stand out more against the other actors, even though there’s not a bad performance in this film. It’s an interesting contrast between his indifference and the emotional investment of some of the other characters in this.

The one thing which will make you sit straight up in your chair is the opening musical notes on the credits, followed by a string of gunshots, followed by a main theme tune which, as I noted earlier, sounds like it was torn straight from the score a spaghetti western. I mention this again because all the way through the movie,  there’s not a heck of a lot of music (at least not by modern, wall-to-wall standards) but when the music does come in it’s usually this bold Morricone-esque, ride-your-horse-to-death-and-beyond, wild spaghetti western style scoring. And it makes sense because Japan has always been a country where spaghetti westerns have been extremely popular (more so than America and the UK I suspect) and treated with a certain amount of respect where they wouldn’t be as well recieved in other countries. This movie seems particularly influenced by the genre... what with Shishido’s distanced and iconic anti-hero characterisation and the climax of the movie which basically ends in a many against one duel in a wasteland of dust, doubling for a western desert. Even the title, A Colt Is My Passport, is quite similar to the English translations of some of those movies.

This is a great piece and it’s a film full of details. Shishido lighting a cigarette, for example, purely so he can judge the speed and direction of the wind before he settles down to make his killing is particularly spell-binding. Another thing the director goes out of his way to do is have the various weapons’ audio signatures different to the others in the film... so the sound of bullet shots pitched against each other gives a more interesting sound dialogue than it would in a movie where the same kinds of gun shot sounds are used for all the weapons. This is a tactic Spielberg used for absolute realism on Saving Private Ryan and, more artificially and artistically, in the Indiana Jones films... where Indy’s revolver actually utilises the sound of a shotgun on the soundtrack. Shishido even digs a trench and makes his own version of a sticky bomb at one point in the proceedings.

It’s stuff like this, the cool music, the cool anti-hero and the little quirks and details that make A Colt Is My Passport another unmissable Nikkatsu treat and Criterion’s boxed set of five of these gems is definitely worth picking up if you’ve not seen them before. My only regret is that there aren’t more of these kinds of movies on the market right now. if you’re into the “cinema of cool” then this movie is not something you’re going to want to let get past you.
Posted by NUTS4R2 at 19:57