Whistle And I'll Come To You 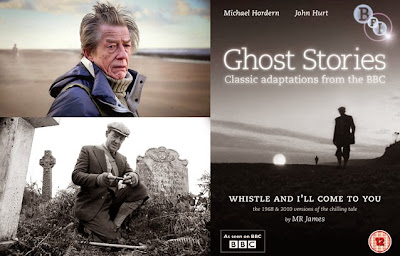 Omnibus: Whistle And I'll Come To You
1968 BBC
Directed by Jonathan Miller

Warning: Some slight spoilers but, since these kinds of tales are mostly about atmosphere as opposed to actual events, you may find the term spoiler redundant in the case of this story anyway.

Oh, Whistle And I’ll Come To You My Lad is a ghost story written by M. R. James in 1904. I first read it in a Wordsworth Edition of his Collected Ghost Stories about 6 or 7 years ago because I was interested in another story in that tome, Casting The Runes (on which the film Curse/Night Of The Demon is based). Oh, Whistle And I’ll Come To You, My Lad is one of the tales in that collection that sticks in the memory and I was delighted to find out that the BBC had made two TV adaptations of this story, one in 1968 and one in 2010 and that, furthermore, both were now available on one DVD. I did, in fact, receive a copy of this from my parents on the occasion of my 45th birthday, back in January but, due to a whole bunch of reasons, have only got around to properly sitting down to have a look at this now.

Well, the first thing I have to say about these two adaptations is that neither is a completely faithful version of the original story and some liberties have been taken by both sets of writers and directors. They both, in fact, even go under a shortened version of the original title. Of the two, it has to be said that the 1968 adaptation by Jonathan Miller, made for the BBC as an episode of Omnibus of that year, is a lot closer to the original M. R. James source than the 2010 version, which proceeds to demolish most of the original story and replace it and graft its own symbols and meanings onto a very basic frame.

The 1968 version stars Michael Horden as the main and, almost, singular, protagonist of the story, Professor Parkin. He checks into a hotel for a bit of a holiday and although he has occasion to talk to another guest, The Colonel, he refuses the game of golf offered him whereas, in the original story, Parkin is actually there to practice and perfect his game of golf. However, this is quite a shrewd move by Miller to lose this distraction, since the running time is a little over 40 mins, and he’s cut away some dead wood which, perhaps, he could have done without.

Michael Hordern plays Professor Parkin as someone who very much inhabits his own inner world, to the point where his internal monologues and attitudes to events around him spill out into the outside world in the forms of noises and exclamations and “Ahs” and “Ums”. He is distracted by the train of his own thought pretty much all the time and often forgets to reply to someone for a while before his thoughts can catch up with him properly and let him back into the real world, so to speak. At other times he will take someone’s words or questions and play with the construction of their sentence with them and explore the many differing meanings that their words could contain and only then find a way of offering a possible route towards starting off on an answer or proper reply (which certain people who know me might find as a character flaw/trait of mine, I’m afraid).

What I get from Horden’s performance in this role, which he performs quite brilliantly, is that I would be irritated beyond belief if I had to sit in a room with this character for more than ten minutes. A man who is so caught up in the play of his own intellectual experience of the world, that he misses the possibility of things outside his own experience of natural (and in this case, unnatural) phenomena occurring. Which, in a way, is one of the things you’re supposed to take from the original story... Parkin’s absolute disbelief of a supernatural realm beyond what he can understand and explore.

Asides from a few liberties (characters cut, scenes excised), the tale of a man who finds a whistle and blows it, inciting interest from a spirit who seems to be a guardian (or possibly even a watchdog) as opposed to anything else, is told extremely well and with a certain degree of respect for the original material. One thing I will, though, say... is that it isn’t really all that scary either. But, scary or not, the tone of the piece is very nice, the acting, especially from Horden who is a genius, is exceptional and, believe it or not, the whole thing is done without the aid of any kind of dramatic underscore. Perhaps, in fact, that lack of scoring was what I was missing for the full fear factor to kick in but certainly, it does do pretty well without one, so I can only say well done to all involved.

The second adaptation, starring the always watchable John Hurt as Parkin, does use music, is perhaps a trifle scarier because of that (though really not much) and is altogether a different kettle of fish compared to the first one. An unnecessary element to the original story is introduced... Parkin’s wife, who he leaves in an old people’s home for a few days while he goes on holiday. She is more or less a mental vegetable but after Parkin finds a ring (not a whistle as in the original story and first adaptation) with the “other” inscription mentioned in M. R. James’ original text (each adaptation uses only one of two inscriptions found on the whistle in the original) he starts hearing noises at night, just as Horden did in the first adaptation... and having visions of scary things following him (again, as in the first). Parkin in this one is a scientist and not the intellectual denier of the occult and supernatural that he was in the original story... so that trait of the character doesn’t really find its way into Hurt’s performance here (not his fault, I imagine, he has to follow a script, after all).

There are more characters in the second version but it all culminates with Parkin being visited by the terrifying (for a few brief seconds) vision of his wife’s soul, who is not happy about being left on her own and, therefore, we have an entirely different message here. Parkin is killed from the shock (this doesn’t happen in either the original story, nor the Jonathan miller adaptation) and, at the end, we are under the impression that his soul has come back to aid his wife and keep her company in the remaining time before her death. Nicely rounded and maybe a bit scarier, the clichéd but effective score helps in that sense, but ultimately not so much an adaptation of an M. R. James story as a different ghost story with a few similar elements.

Hurt is excellent, as is to be expected, and so is his supporting cast including Gemma Jones and Lesley Sharp. It’s not bad as a cosy ghost story without a whole lot of scariness in it and the photography is nice. Ultimately, though, this is a not so great adaptation and I think, changes aside, the Jonathan Miller one is the one to go for as both an entertaining watch and something a little closer to what the mind of M. R. James was trying to get to. I would consider neither of them definitive though, and would like to see someone else have a crack at this one sometime. However, if you’ve got an hour and a half free, which is just about the combined running time of the two versions, and have nothing better to do and have a hankering to watch an old fashioned ghost story but without the intense scares that usually come from this kind of material, then you could probably do a lot worse than take a look at these two versions of a classic tale.
Posted by NUTS4R2 at 20:00