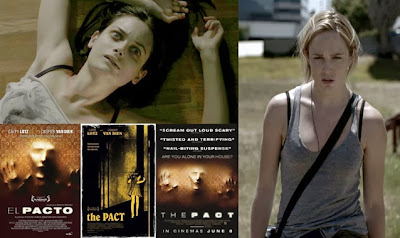 Warning: There are some medium sized spoilers in this to let me talk about the points I want to make here, but I’ve been as oblique as I felt I could possibly get away with.

The Pact is a pretty interesting horror movie directed by Nicholas McCarthy. Interesting in that it’s not only written and directed by him but also based on a short, 11 minute movie of the same title he made the year before. Actually, having watched the short movie, also on the BluRay, which starred Firefly alumni Jewel Staite as the leading lady (a much different character to the one played by Caity Lotz in the feature length version), I think “inspired by” would have been a better choice of words. Although certain dialogue phrases and incidents were used in the 2012 movie.

It’s actually an example of a specific sub genre of ghost story, in that it belongs in the category of “benevolent spirits who are trying to help out the lead human protagonist”. Of course, since these are also horror movies, bent on scaring the &@%£* out of you, then the poor spirits do tend to make a mess of things for a while and mostly terrorise the main protagonist in question, in this case Caity Lotz portraying the character of Annie. And, of course, these shenanigans don’t always hold up under scrutiny when you think back and examine the motivations of the ghosties in question. These unearthly protagonists seem to be only too happy to give you all a good, cheap scare before getting around to lending out a helping hand.

Case in point is a scene fairly early in the movie when the lead character is being pulled towards a cupboard by ghostly, unseen hands. This really makes no sense when it comes to the motivation of the spirit because it’s putting the lead character in danger... although, maybe a case could be construed to say that the ghostly presence is trying to get help to save the life of another character. Not too sure to be honest... in some respects it’s a good thing that ‘happenings’ are left nicely vague and up to the audience to put some thinking time into the movie. On the other hand, this does tend to get fairly muddled when it comes to some aspects.

For instance... there’s no pact in The Pact.

I’ll say that again to let that one sink in... there’s no pact in The Pact.

Now, I’ve actually read the director’s defence of this issue and I can almost buy into his justification of the title when it comes to the fact that there’s, kind of, an implied agreement that a certain character remains hidden and secret over the years. It just kind of nibbles at the edge of your consciousness in terms of credibility that the writer/director Nicholas McCarthy did actually intend this, maybe, to be represented by the title. But then I saw the 11 minute short he wrote and directed, which informed this feature length version, and the elements I’m referring to which “could” possibly have been pointing towards the idea that there was a pact, are definitely absent from this short. Incidentally... couldn’t find any kind of pact whatsoever in the short version either. But that’s an annoyance and not a criticism of either of the movies... after all, most artists would tell you that the title of a work is the least important thing.

All this aside, though, there is a certain skill and depth of appreciation of the ghost story inherent in this movie... and a nice idea of ghostly forces using electricity which gives the director a kind of “canary in a mine shaft” warning system with which to scare you (in the video game and movie versions of Silent Hill, this would be the equivalent of the siren going off).

One thing I’ll say is the timing is off a little in the spooky scenes, where the spiritual hand of scarifying things is perhaps introduced too early (could have done with a longer, more laid back cut of this before the scares start happening, to be honest) but since the director obviously knows what he’s doing, the ‘incidents’ are not too diminished and he does manage to effectively ramp up the suspense whenever he needs to... giving the audience new, key visuals to target their anxieties on as the movie progresses... cupboard, hidden room, basement etc.  There’s an absolutely brilliant sequence, for example, when the lead protagonist calls in a psychic/medium type of character who is the very picture of “gothic waif”. A terrifying payoff to a scene where they are concentrating on getting her to safety and then they all look up is brilliant... although it has to be said it kinda makes no sense in the general logic of the ghostly goings on at all. Or perhaps I just didn’t get it.

About two thirds of the way through, a scene sealing the fate of one of the main characters tips you off to the fact that there is the danger of this film having a scooby-doo conclusion if things are not played right and, although the director is skillful enough not to make that error, I think this scene came just a little too early for my liking... because it did tip me off to the very real idea that there was something a little more than just a ghostly presence happening here. Could have been left dangling a little longer and held that back to the final sequences, methinks.

But, as I say, still a fairly skillful entry into the ghost story movie and certainly an entertaining enough one. Technically very nice as well with some beautiful cinematography where the director and camera operator make good use of differential focusing (rack focussing) to nice effect. Some nice designs and the mise-en-scene is very clean... like a movie directed by Hal Hartley or someone of that impressive ilk. Maybe a little too clean in places... I started noticing little things like “There’s no way someone would have bothered to straighten that used spoon on a napkin like that, it needs to be at an angle and more dirty.” Things like that which I possibly shouldn’t even have been thinking about did tend to pop up in my mind at certain points

Overall though, it’s a really great, quite intense horror movie at times and, although I was shouting at the screen when the various protagonists did something stupidly “horror-movie-dumb” (like going down into a hole where you can be easily trapped rather than just wait for an easier escape and then return with the cavalry), I have to say it’s quite a scarifying movie and one which I’m glad I saw. Add to this some pretty fine performances and some typical modern horror outbursts on the scoring front (and that statement is not intended as a derogatory remark... far from it), coupled with the clean look and the brooding atmosphere, and The Pact marks itself out as one of the more competent, intriguing of the horror movies released over the last few years.
Posted by NUTS4R2 at 15:20