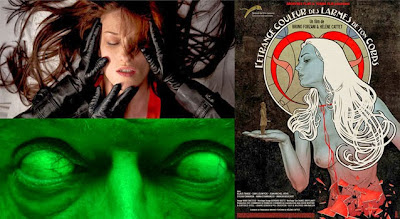 Warning: I’m not sure if you could classify any of the stuff I’ll say here as spoilers or not, given the nature of the film in question, but if you want to know absolutely nothing about this then... don’t read I guess. Or better still, go see the movie and then come back and read this.

Unwarning: Having read what I've written, I now realise it's pretty spoiler free... so you must do what you feel is right.

Back at the start of 2011 I wrote a review of the first feature length film by the two directors of The Strange Colour Of Your Body's Tears. The film was called Amer and it was my “birthday trip” film that year. I absolutely loved it and I knew, even back in early January, that it would take top spot in my Best Movies of 2011 listing. When I saw that the same two writer/directors’ follow up film was playing at this years London Film Festival, I knew it would have to be one of the three hot tickets I wanted to grab.

Unfortunately, because of various problems with the BFI website on the day that advanced LFF tickets went on sale to members, I only managed to get two of the tickets I wanted, the third one selling out before the end of the day (and before I could make arrangements for another purchase route... thanks for all your help Jake, or I wouldn't have got any!). However, at least one of the two tickets I got was for this one and thank goodness for that.

Last night I went to the Vue cinema in London. It used to be the Warners but my understanding is that it had a terrible rep as the Warners so it got rebranded (is this right?). Anyway, the Vue is one of the cinemas hosting this year’s London Film Festival and, I have to say, at one point I would have called it one of the shabbiest screens in London... except, nowadays the majority of the good screens in London are no longer with us so... I’ll just say it's one among others and leave it at that.

When I got there, I had a good omen of things to come because they had the poster for this movie outside Screen 5 where it was playing. It was an obvious rip off, or homage if you prefer, of the graphic poster design of Alphonse Mucha, one of my favourite “art dudes”. And, of course, it’s a really beautiful poster. Absolutely gorgeous. So glad they used this.

Before the film screened the two directors were introduced: a very cool and charming Bruno Forzani and his groovy partner in crime, Hélène Cattet, bubbly, vivacious and pregnant with their child. They came back for a round of Q & A afterwards which, despite the slight language barrier, was extremely informative and also proved to me, without a shadow of a doubt, that these two artists would be great people to hang around and talk film with in a wine bar or some such establishment. Very nice people.

And then I got to finally see the film I’d been looking forward to for a while...

Once again, Cattet and Forzani deliver a spectacular treasure of motion picture art that will knock your eyes out (quite literally, perhaps, in one scene). When their first film Amer came out, people compared it to giallo because the film used the stylistic trappings, both visual and aural, of the Italian genre which has had a very strong re-emergence of popularity internationally since the dawn of the DVD era. Last year a film called Berberian Sound Studio came out and that film got heavily promoted as being made in the style of a giallo but.... it wasn’t. The film had very little in common with the genre which it was said to be representing stylistically and I thought that, although the movie was okay, it was very much misrepresented in exactly the opposite way that Amer wasn’t. Berbarian Sound Studio even had a film poster that seemed to deliberately echo the original promotional posters for Dario Argento’s Four Flies On Grey Velvet... which leads to some pretty big expectations and some major disappointment if you’re going to go into that particular film expecting something similar. But Amer, did use the tropes of giallo even while it wasn’t actually a giallo, so much... although a case could certainly be made if you wanted to take some of the things shown on screen as a literal representation of reality... which I don’t think is a good idea with these two directors.

Well, I’m happy to say that The Strange Colour Of Your Body’s Tears continues with this stylistic system of delivery of the images. It very much uses, not just the intense lighting schemes of directors such as Mario Bava and Dario Argento (yeah, there’s some fantastic red, green, blue filters/tints used and pitched against each other in this movie), but also some “almost but not quite” recreations of scenes of films in this genre (among others). The “secrets of the house” kind of sensibility may ring a bell with fans of the Italian director Dario Argento’s horror film Inferno (the first sequel to Suspiria), whereas the scene where one of the lead protagonists, if this film could be said to have any favoured protagonists or antagonists, is knocking through a wall to another room/realm can’t help but invoke memories of David Hemming’s trajectory of discovery in Argento’s fourth giallo Deep Red (aka Profondo Rosso). It’s something these directors like doing and they make their intentions very clear right from the outset when one of the characters, who goes missing at the start of the movie, is called Edwige... after one of the main queens of giallo, Edwige Fenech.

Another similarity is that the film is both incredibly sexy and quite violent... not necessarily gory, although there is very much a suggestion of gore (blood splashed from a vaginal stabbing and fetishised by the camera gaze, for example), but more the kind of violence that you feel, aided by the juxtaposition of some quick cuts (both kinds of cuts... camera and knife) and some very distinctive and in some cases challenging sound design which people like Alan Splet, I’m sure, would approve of.

Which leads me to another main cinematic connection for this film, concerning one of Alan Splet’s most creative collaborators, David Lynch. Like Amer and some of their short films, The Strange Colour Of Your Body’s Tears has a very strong thread of surrealism running through it. It’s very labyrinthine, which Hélène Cattet told us was the intention in the Q & A session at the end, and it takes you on a journey where every possible solution to the “puzzle” of the milieu is answered with another visual/aural question, as opposed to anything reminiscent of closure (although it does come close to closure at one point but I think that was almost a red herring). I think I’ll possibly discover more “ending” in the movie when I’ve viewed it a few more times (on blu ray, as soon as possible please) but for now I couldn’t really, after having seen the film, tell you what it was about.

There are extended sequences of repeat cycles which in some ways echo a famous scene in Mario Bava’s Kill Baby Kill, reappropriated by David Lynch for the final episode of his Twin Peaks series (I think it even showed up in Berberian Sound Studio too, actually). Although I found this did drag a bit towards the end (which is my only criticism of a near perfect cinematic experience), these scenes are very much a metaphor for the style of storytelling (for want of a better term) involved here... which kind of reveals itself like a series of Russian Matryoshka Dolls which, I’ve just realised as I type those words, were also included as a visual image in the movie. So they’re very clued up about the nature of their own work methinks, these two directors. Which makes for a richer viewing experience for all of us.

And then, of course, there’s the soundtrack.

Not many directors can pull off a cohesive “found” soundtrack. Tarantino, the king of needledrop scores, is pretty good at it. Cattet and Forzani are better. With Tarantino’s films they tend to turn the movies into a bit of a game. Distracting totally from the visuals while your brain tries to remember which film the music originally came from. Although there is very much an element of that here (especially since some of the visual images are so directly referencing other things) the way in which these two use old Italian giallo (and other) scores from the 60s and 70s by the likes of such luminaries as Nino Fidenco, Bruno Nicolai and Ennio Morricone, is just astonishing when coupled, at full blast, with the strength of the visuals and sound design. At one point I forgot I was listening to Bruno Nicolai’s score from All The Colours Of The Dark (a giallo featuring Edwige Fenech, who I mentioned earlier in this review) because I was so immersed in the experience of watching this movie.

And I think that last statement kinda sums up the point I want to make. Hélène Cattet & Bruno Forzani, with only two feature films, are already two of modern cinemas great artisans. Their films are pure cinema, which is a phrase which I know is not popular at the moment. But by pure cinema I mean that they are showing you something you can’t see in real life and are doing so in such a way that the shot design, acting, story structure, sound design and music come together to create a totally immersive cinematic experience. Whether you like the experience is up to your own personal sensibilities and whether thier work strikes a chord within yourself... but certainly they follow in the footsteps of such pioneers of cinema like Georges Méliès and stand head and shoulders with such celluloid masters as Fellini, Kurosawa, Bergman, Tarkovsky and any other major talent from the history of cinema you would care to name.

The Strange Colour Of Your Body’s Tears is two parts Italian giallo, two parts David Lynch and two parts Jan Svankmajer... and if you go in expecting that kind of mix of sensibilities then I don’t think you’ll be disappointed. This film gets a big recommendation from me and will almost certainly be the best first-release film I see this year (or next year, depending on when it gets a cinema release).
Posted by NUTS4R2 at 14:26