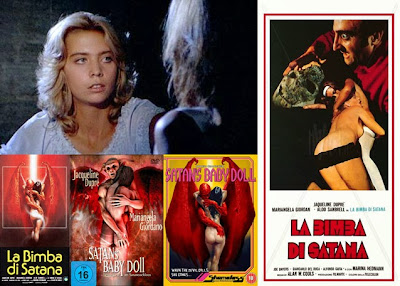 Warning: This one has major spoilers... although, to be honest, I don’t think plot points and story development are going to be on your mind if you’re prepared to watch stuff like this.

Hmm... well this film has Aldo Sambrell in it. A popular star of many Italian films and spaghetti westerns. The last two films I saw with him in it were the modern exploitation flick Flesh For The Beast (which also featured a cameo by the lovely Caroline Munro) and the second Superargo movie, Superargo And The Faceless Giants, where the titular villains were not even tall and all had noticeable faces. So that was a bit of a contradictory title then. In that one, he played a levitating Indian sidekick/mentor for the main character (my review here).

It also stars five other people (three of whom are beautiful women and who are in and out of their clothing like nobody’s business) and the whole thing is set in a large manor house with a small dungeon. And... that’s about it.

There’s not a heck of a lot going on other than that. Half of the acting seems to be shouting insults at each other and the other half seems to be giving each other long, sombre looks with enough gravitas to fill a bathtub. Take the family priest/manservant kind of character... I’m sorry, I was really unsure of what role he was supposed to function as, in this shouty household. After Maria twitches after death, he goes to a little altar set-up and starts a ritualistic exercise which I can only describe as advanced chicken fondling, shaking and eating... raw and uncooked with a mouthful of blood and feathers. This is all accomplished, like more of the acting than I expected in this movie, with no small amount of vein popping, facial contortions and much flaring of the nostrils.

It probably should have come as no surprise to me that the same guy is later strangled by a bandaged mummy corpse of some strange description, which just happens to be lying around in the family crypt while the dead guy makes love to it, in order to try to summon the dead mother. He perhaps needn’t have bothered being all that ritualistic, to be honest. She was already up and about and killing off the family doctor when he was trying to embalm her.

I think that earlier chicken scene comes slightly after (I think) another sequence where the head of the family Antonio Aguilar (Sambrell’s character) has acquired heroine from his doctor friend to help his crippled, mute, wheelchair bound brother’s back pain... but, in actual fact, so he can just shoot up himself.

His brother Ignacio, meanwhile, has wheeled himself to the crack in the door of the trainee nun of the household (yes, this household has it’s own nun for some reason) played by the sexy Mariangela Giordano. Here, he can watch the lady in question disrobe and indulge in some hot nun-masturbation sequences, including extremely badly edited-in softcore scenes which don’t quite match the surrounding shots and which, frankly, appear quite comical. Especially when a still photograph of our voyeuristic wheelchair user is periodically superimposed over shots of Ms. Giordano running her fingers through her pubic hair. I know I shouldn’t laugh but... well. It was badly handled. It later turns out, of course, that the appearance of the naked daughter has the power to lure Ignacio slowly out of his wheelchair so he can fall to his death down a conveniently placed hole in the floor. Sex definitely seems to equal death in this movie and all three actresses seem to be very adept at getting their clothes off and practicing self abuse quite a bit... before getting it on with one of the other actors or actresses in the movie.

This all sounds very good and proper for an exploitation movie, to be fair, but... honestly? I prefer my exploitation movies to have at least an air of fun about them. This one is poe faced and the prominent nudity and flesh stroking dotted throughout the movie really don’t save it from being a very tedious affair.

There are more kills, of course, as Antonio is, um, backed off and over the railings at the top of a stair well to his death and our poor nun, who decides she would rather sleep with the dead mother’s corpse than sleep with the dead mother possessing her daughter, does exactly that... whereupon the corpse starts sexing her back while simultaneously crushing her to death with her bisexual caress. Actually... it really doesn’t look like she’s squeezing that hard at all, but blood starts coming out of the nun's mouth so one can only assume this is what’s happening here.

There’s a few nice things about the movie. Some of the shot set ups are pretty cool... but Mario Bianchi is no Mario Bava when it comes to this game, although I understand he did help out on one of Bava’s best movies, Five Dolls For An August Moon. There’s a nice shot of a wheelchair being pushed where the camera is moving with the wheelchair... giving the same effect and technique that Scorcese used for Harvey Keitel’s drunk scene in Mean Streets and, later, Aranofsky used in Requiem For A Dream, where the camera is strapped directly to the body.

And the music by first and last timer Nico Catanese is quite good, coming across as some kind of pseudo-Goblin affair which was all the rage at the time and which seems to work, like most of the Italian horror and gialli with this kind of music do, by being over the top and out of kilter with the on-screen visuals to the point where it kinda drives the visuals instead of the other way around. Very strange but, like the best applications of this style of scoring, it does seem to work. That being said, there’s only about two tracks in the entire film and once you’ve heard the exact same one played over and over again to score both sex scenes, shouty scenes, drug taking scenes and, um, more sex scenes... well, it does get a bit dull and outstay its welcome after a while.

So that’s about it for this reviewer, I think. I don’t seem to have anything else to say about this one. You’d think that, with the amount of sexromancy* going on in this film, it would at least be mostly watchable but, sadly, that just isn’t the case with this particular exploitation movie. Never mind Satan’s Baby Doll... it’s more like Satan’s Baby, dull.