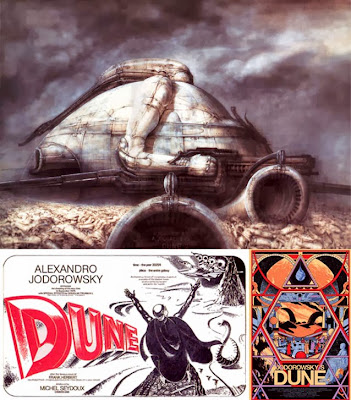 Alejandro Jodorowsky is one of those directors who seems to violently split people when his name comes up in conversation. There are those who think he is quite mad and find his films too challenging to stick with and will let you know about that in no uncertain terms. And there are others who relish the directors own style of creative madness and embrace his films as the great works of art that they should, like all great art, be perceived to be.

Having said all that, I tend to have a more muffled and jaded reaction to his work than most people I talk to on the subject, who seem to be pretty much outspoken either for or against his films... which I think says something in that, at the very least, Jodorowsky’s work has effected them to that extinct (which I personally feel is a good thing). I know that I myself, while having no real shocks or surprises from this director’s works (nor many others in recent years) do, nevertheless, enjoy his movies and speak of them in a positive manner. And, certainly, I remember heading off to the Metro cinema in London (now sadly lost to us) with my friend Kerry back in 1989 to see the movie which was to be my personal introduction to this director’s work, Sante Sangre. I loved that movie a lot, with it’s comfortable and seductive blend of high art and trashy b-movie sensibility... and this has carried through over the years in a more sedate manner as I’ve seen his earlier works such as Fando y Lis, El Topo and The Holy Mountain. In fact, my friend Kerry bought me a box set of this man’s first three movies as a Christmas present a few years ago... for which I am grateful.

Back in about 1979/80, when I would have been about eleven or twelve, I was in one of my favourite comic/book stores (Forbidden Planet) and spied in the “art books” section, two very expensive tomes by the person who would soon become one of my favourite artists... H. R. Giger (Necronomicon and Necronomicon II). I can’t remember if the text was in English on those original editions but I suspect not. When I received these two books for Christmas and birthday, I fell in love with the bleak artwork in the pages and was astonished to see a photograph of the artist, H. R. Giger, sitting around in a desert with my other art hero of the time, Salvador Dali. It was pretty amazing and, from what I could work out from the text (yeah, it must have been in a language foreign to me, I reckon) the two had been collaborating on conceptual designs for a movie version of Frank Herbert’s seminal sci-fi classic Dune. As it happens, I was wrong about the nature of the collaboration, but I’ll get to that soon.

Now, I’d not read Dune at that time in my life but, as a child growing up in the late 1960s and early 1970s, it was almost as impossible a book to escape as J. R. R. Tolkien’s Lord Of The Rings. It, and it’s sequels (I think there were only three sequels at the time but, as I’m sure you know, there are many more now) were all over British bookshops for many years and, even had they not been, there was usually a copy hanging around the house as my dad was a big fan at the time. When the David Lynch version of the movie got made I was not all that impressed with it, to be honest (neither was Jodorowsky, in one of the funniest and most memorable scenes in this film). Perhaps if I revisited it nowadays I might be more receptive to it but, to me, David Lynch was the spirit of Eraserhead... not the version of Dune that ended up on the big screen and underwhelmed audiences at the time.

Frank Pavich’s new documentary film, Jodorowsky's Dune, tells the story (of which there have been many rumours in the past) of the time when Jodorosky wanted to make an epic version of the movie... and how it all fell into place and then, after a long time in pre-production, got thrown away in favour of a version which was simpler to understand by the suits in control of Hollywood. And as you may expect from anything associated with Jodorowsky... it’s a mad tale.

H. R. Giger was, indeed, invited to do some of the conceptual art for one of the planets, which he did and which was pictured in those Necronomicon books I was given as a teen. Another major designer on the film was Chris Foss, the illustrator who many will remember had a gift for paintings of highly detailed starships which graced the covers of almost every science-fiction book going in the seventies and eighties. If you see a Chris Foss starship design, you will know exactly what I’m talking about. His work is so distinctive. What the documentary doesn’t mention, and I’ve no idea why, is the other thing that Fosse is equally well known but actually less famous for. The black and white illustrations in the original best selling editions of The Joy Of Sex.

The tale of the movie gets more and more brilliant and less and less likely as Jodorowsky talks extensively for the documentary. He recruits Dan O’ Bannon’s services for the film (after saying no to one of Hollywood’s leading special effects men, Douglas Trumbull) and then secures the services of, among others, Salvador Dali to play the Emperor, Orson Welles to play the Baron Harkonnen, Mick Jagger as somebody who I completely forget and Pink Floyd to do the music for one of the planets. They are Jodorowsky’s “Dune warriors”. He even gets his son trained in various combat styles to ready him for the part of Paul.  And as crazy a mix as that all sounds, Jodorowsky’s stories of how, for the most part, these people just turned up in unlikely places when he had no idea how to find them and then said yes, is even crazier. And the way he courted both Dali and Welles is absolutely amazing and something I don’t think I’d heard before.

The documentary culminates in the famous, rare book which was put together to sell the project (honestly, I can’t describe this here, you just have to see this movie) and  finishes by showng the influences on cinema resulting from the pilfering and reusing of the concepts created by Jodorowsky’s extended “Dune family”. Some of which are easy to see and others... which are not great examples, I would have to say.

Pavich’s film is absolutely fascinating and rivetting, using mostly talking head footage by Jodorowsky, Foss, Giger and others close to the production, but also from the underused director Richard Stanley (Hardware, Dust Devil) and Jodorowsky’s good friend, the director Nicolas Winding Refn (Drive, Only God Forgives). There’s also some animated sequences where the director brings some of the storyboards and designs for the film to life and, as I was very relieved to discover in the Q & A session with the director after the screening, the people in question had been very careful to just breathe a little life into the original drawing and paintings for the animations, rather than add their own baggage into the mix.

The whole thing sails along at a pace which is a reflection of Jodorowsky’s own unique personality and enthusiasm for the project and it also has a kick ass score by Kurt Stenzel, which is quite “in your face” but catchy and appropriately mixed into the film. It’s a bit reminiscent of the small scale chamber works of Philip Glass but it is quite distinctive and hypnotic and although it strikes you right away as you’re watching, the music doesn’t distract from the people who are talking on screen and is very mindful of the job it needs to be doing.

So there you have it.

Jodorowsky's Dune is a great documentary made by a director who knows when to step back from the material when needed and who knows well enough when to add a bit more to it to make it interesting without intruding on the hearts, minds and words of the people being interviewed on screen. It also brings us the full tale of one of the classic unmade films in movie legend, which is something we should all be grateful for. So, if you want to know about all this stuff then you should definitely try to see this movie. It’s worth the price of admission just for the late Dan O’ Bannon’s description of his first, drug tinged meeting with Jodorowsky. Don’t miss out on this one.