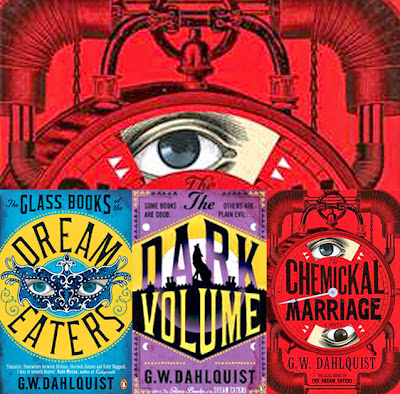 Warning: Very slight spoilers regarding the way
the second book ended at the start of this review.

The Chemickal Marriage is the third part of the trilogy/series begun in Dahlquist’s heavily promoted The Glass Books Of The Dream Eaters and continued in The Dark Volume. Like the first two books in the run, it details the continuing adventures of the unlikely alliance between the prim and proper Celeste Temple, the assassin Cardinal Chang (he’s not a cardinal and he’s not Oriental either, but I’m not going to explain it all again here... read the book or maybe my review of the last one) and Dr. Abelard Svenson.

This alliance and even the existence of a third (already hard to find although practically brand new, for some reason) book in the series was very much in doubt but, as I’d explained in my last review, the apparent deaths of Chang and Svenson at the end seemed a trifle incomplete in their delivery and reportage by various characters in the novel and it is, therefor,e with the greatest of ease that Dahlquist is able to bring them back from the dead for this third adventure. Or should that be the third part of their adventure, since this novel dovetails into it more or less exactly where it left off and, once again, deals with several cabals of people who have knowledge of the “blue glass” detailed in the other books... and are using their knowledge to wrest control of the country.

In this book, we have the usual new elements, being glass cards which pass on an emotion rather than a narrative memory and, also, bombs constructed of slivers of glass used by nefarious people as they try to change the course of the country with only Temple, Chang and Svenson to stop them. And, once again, the plot, such as it is, follows a road movie kind of format in that it concerns the journeys taken by our three heroes, both together and individually, as they try to put things right. The stakes are raised somewhat in that both Celeste and Chang are carrying some kind of fate wrapped up in their experiences of the blue or orange glass but the format still feels like an old fashioned Universal or Republic serial in its wandering from here to there, and then back again, while threats are encountered and entertained.

I’m not knocking this format, it works fine, but again... I wish we could have had a completely fresh set of ideas involving these characters, rather than a retread of the same concerns and nefarious plans of those who control the glass. The writing was solid but, once again, I would have rather had more of a specific target in sight than the episodic miniature tasks reminiscent of, say, a Flash Gordon serial from the 1930s. Again, there’s nothing wrong with this approach and it’s all very well written and presented clearly and concisely... I just didn’t care about the characters as much as I did in the first two novels, to be fair.

The sexual undercurrent running through the minds of several of the characters returns here, perhaps slightly more blatantly and certainly in a quite amusing fashion in a couple of scenes, but again I felt that the writer was holding back on some of the characters a little and the sexuality of the thing still felt more than a little muffled in most places. However, the descriptive prose is as well written as it has been in the other two novels and the dialogue sings in even the places where exposition is at its most alarmingly high.

That being said, the technical complexity of that exposition, being based as it is in alchemy rather than hard science, seems to have little real bite to it and I did find myself feeling at a loss at several points as to why I was bothering to try and follow the made up processes of placing someone’s soul into another body (the users of the blue glass are up to their old tricks) when a) only about two characters in the book were able to understand it themselves and b) it seemed so obvious that the final set piece in regards to this scientific mumbo jumbo could have gone either way without any real necessity to the reader “understanding” the process or not.

But I am being quite harsh on it because I did enjoy the book, although I feel the three books have lost a little something over each release. We are told that this is the last volume but, towards the end, a huge loose end is left unaccounted for and one of the main characters deceives the other two and goes off to discover the whereabouts of this “loose end”... and this just begs the question of, are we really done with these characters just yet?

I, for one, hope not and although I wouldn’t recommend this novel as any kind of jumping on point (you really need to start with the first one) it’s not something lovers of the first two books in the series are going to want to miss out on. Despite its weaknesses (as I perceive them), it’s definitely another corker... just a little more dissipated through repetition of the main themes consistent witin the trilogy as it stands so far.

Still, like the blue glass itself, you may find it something to get absorbed in.