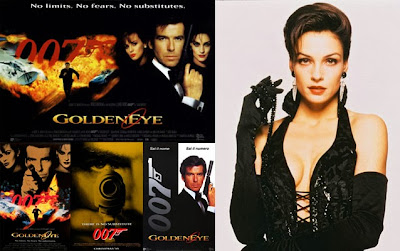 Okay then. This one’s a corker.

After the disappointment of the previous film, Licence To Kill, which had Timothy Dalton playing Bond very well in what was essentially a rubbish movie... I found myself in kind of a state of disenchantment with the Bond franchise once again. The gap between the last film and this one was nearly six years and somehow I’d just assumed that everyone involved with the mess of that last movie were just hanging their heads in shame and that it had been the franchise killer. Seriously, I’d just thought that everyone had realised how terrible Licence To Kill was and just finally decided to stop making any more Bond films for fear of accidentally doing the same thing. I’d written it off, just as I’d written off any post McCoy Doctor Who stories way back then too.

Truth be told... although the box office on Licence To Kill was quite poor, there were also various legal issues which were getting in the way of continuing the series. By the time all the wrangling had been sorted out, Timothy Dalton had decided he’d had enough, which was a great loss to the franchise but also helped the series gain legs when the new bit of casting proved equally suitable for the role.

Pierce Brosnan was the guy I had pegged to play Bond in The Living Daylights without even knowing he’d come that close (holds up finger and thumb with small gap between them) to going ahead in the role in that film. This time, at least, when I told people they should have got Pierce Brosnan in on it, they mostly knew who I was talking about. And low and behold, they actually gave the role to Brosnan... who I still, at the time, didn’t even know had been up for the role even.

So this was it then. I’d have to go and see the new Bond movie and just keep my fingers crossed that they’d learnt a few lessons since Licence To Kill.

As it turns out... they had. GoldenEye is one of the top five Bond movies ever committed to celluloid. They get everything just right in this one and it’s truly a film which ushered in a new golden age of Bond... for a little while, at least. If you want to know what my top 5 Bond films are in ascending order it would be as follows: 5. GoldenEye, 4. The Living Daylights, 3. Dr. No, 2. From Russia With Love and 1. On Her Majesty’s Secret Service. If you want to get in to Bond then those are the five to get you “into the groove”, so to speak.

This film brought a lot of cast changes with it. The Bill Tanner character, who actually appears in 6 of the Bond movies to date, was played this time around by Michael Kitchen. Judy Dench makes an amazing M and Samantha Bond was an equally well written Miss Moneypenny. There were also a couple of new characters with Jack Wade (a kind of stand in for the Felix Leiter character since Licence To Kill, as the films didn’t have the guts of bringing the character back with his disabilities like Fleming did in the books after Live And Let Die), played by previous Bond villain Joe Don Baker and Valentin Dmitrovich Zukovsky as played by the lovable Robbie Coltrane. Both reappear again later in the series.

And just in case there were any doubts this was still a Bond movie... we have the return of Desmond Llewellyn carrying on with his usual Q personae... which is all very entertaining.

So the point I’m pushing here is you’ve got a cast of absolute professionals doing their thing and, for once, they’ve got a script which, while just a tad creaky now, is still bloody well written and in the hands of these acting geniuses the lines sing off the page.

GoldenEye starts out with an absolute powerhouse of a pre-credits sequence involving extreme bungee jumping, a stealth mission gone wrong, a shootout, a chase and an airplane catch up stunt which takes the biscuit and plays with the bounds of credibility... until you realise that a) it’s physically possible and b) this is proven because the stunt in question seems to have been done for real in the movie. You also have a character in this sequence who is left for dead and returns as the villain for the main body of the movie, which is set nine years after this pre-credits sequence. I think this is the first time that kind of long dead character follow through from the opening has been done in a Bond film.

After this we go straight into an absolutely brilliant Bonder than Bond opening title sequence which, in my opinion, has never been bettered in the movies since this one and it’s backed up by a pretty good ballad too, sung by Tina Turner.

Furthermore, after these two fabulous things, we then go into a post-credit sequence car chase/race between Famke Janssen and Brosnan which is a completely, jaw droppingly, beautiful partnership between some brilliantly designed and well thought out footage which is lovingly married by the editor, who cuts it perfectly. I think this sequence alone is something which should be used as a text book for any budding action directors. It’s a fast sequence which is beautifully crafted and which doesn’t lose the audience... a perfect example of speed, power and wit, presented intelligently.

And the best part of all of this is... the film does not go down hill after this heady series of “opening events”.

GoldenEye is also one of the perfect Bond films because, unlike the next movie in the series, which suffers from this a little, it doesn’t just string big action sequences together without giving the characters and plot time to breathe. It’s a proper Bond film and not just an action fest and this is important, I feel, on a Bond film. It’s a spy movie genre... not a Hollywood hit and run.

Okay, I’ll tell you up front that I really love the GoldenEye score but that it has very many detractors/haters in “film music fan” circles. For some reason a lot of people really disliked it. Personally I was thrilled at the time that Eric Serra, the guy who breathed musical life into such Besson films as Subway, The Big Blue and Nikita, was scoring this movie and he didn’t let me down.

Even from the pre-credits sequence, the music hooks you. It starts very early on by pumping the classic Monty Norman Bond theme, orchestrated as a kind of bass percussion underneath the music... a slow, pounding, relentlessness that “brings the Bond” with every note. This is a device re-used throughout the film but, if this wasn’t enough, you also have the famous three note trumpet motif from Goldfinger (you know the one) reorchestrated for synthesisers and punctuating this opening with a kind of audio echo of Bonds past. It’s truly fantastic and it really angers me when people on various film music message boards say this score has no tune in it... um, people, it has both the Bond theme and quotes from Goldfinger in it right from the outset... get a life.

I loved David Arnold's scores for the next two movies in the series but I think Serra’s score holds it’s own with a lot of the better Bond scores. Put it this way... when this film came out I’d been kinda having a break from listening to movie scores for a year or two. I was more into avant-garde contemporary composers or atonal/serial modernists at the time. GoldenEye reminded me why I’d spent years listening to movie scores and reignited my passion for the art form, which I’d been interested in since about the age of four, but which really took hold of me when I was nine. Similarly, my cousin, who really likes movies but isn’t really into soundtracks all that much, went out and bought this score at the time too because he loved it in the movie so much and I know he really liked the album presentation. So I find negative comments about the score a bit annoying when I think it fits the film like a glove, to be honest. There’s a tank chase sequence which is really ace in the film and I think the score sounds out of kilter with the rest of the movie... but that’s because that sequence was scored by another composer when the producers etc lost faith with Serra’s score. The irony of that is, Serra’s original tank chase music made its way onto the soundtrack album and... well... they were crazy to rescore it. It’s perfect!

Overall, the film is a well rounded action adventure yarn within the spy genre it rises from. It’s a brilliant package which doesn’t forget to appeal to what’s in your heart before it gets back to coaxing up your adrenalin levels.

Alas, the UK blu-ray of this version retains the same BBFC cuts that I thought were going to be reinstated this time around. I’ve bought three DVD prints of this film over the years and they’re all different. The only way to see some quite edgy stuff which reminds you how the writers had tried to put the toughness back into the Bond character (albeit in a slightly misogynistic but not inappropriate way) is to buy the US edition of the movie... which I will be doing again for the stand alone Blue Ray version at some point... which will bring my total count on DVD and Blu Ray (I’m not even going to bring up VHS) to 5 prints. Not good but, hey, what can one do when faced with an overly censorious government.

And that’s that. Brosnan was a great version of Bond and I was deliriously happy that the franchise was back on course again. 1995 was a pretty good year for Bond fans.

Dr. No
From Russia With Love
Goldfinger
Thunderball
You Only Live Twice
On Her Majesty’s Secret Service
Diamonds Are Forever
Live And Let Die
The Man With The Golden Gun
The Spy Who Loved Me
Moonraker
For Your Eyes Only
Octopussy
A View To A Kill
The LIving Daylights
Licence To Kill
GoldenEye
Tomorrow Never Dies
The World Is Not Enough
Die Another Day
Casino Royale
Quantum Of Solace
Skyfall
S.P.E.C.T.R.E
Posted by NUTS4R2 at 20:32