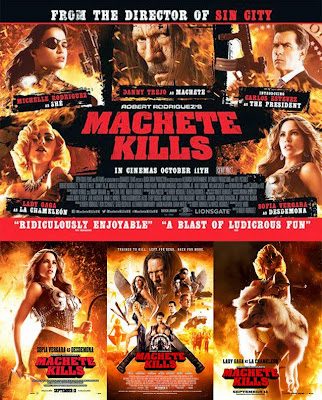 The original Machete movie was a spin-off movie of a fake trailer used in Rodriguez and Tarantino’s Grindhouse project (released separately as Planet Terror and Deathproof over here in the UK). Like other projects made from the fake trailers in Grindhouse, such as Hobo With A Shotgun, Machete was a modern movie masquerading as a 1970s exploitation picture but made with a dash of self-conscious nostalgia for the sub-genre.

Both Machete Kills and Machete Kills Again were put up at the end of the original Machete as two films in which the title character ... um... Machete (played by Danny Trejo), would return. And now he has, in the promised Machete Kills. This was a film I’d really been looking forward to.

The film opens with a new fake trailer, that for the third movie in the Machete trilogy which has had something of a title revision since the last movie. Now the next Machete movie after this one, if the series gets that far, is Machete Kills Again... In Space. And indeed, the trailer looks wildly silly, it has to be said. Laser beams, Buck Rogers robots, light-sabres, light-machetes and a host of other things referencing the boom to plunge a character into the sci-fi milieu left in the wake of the original Star Wars movie’s cinematic success. Although this trailer is quickly referenced again at the end of Machete Kills (amongst other pre and post-credits chunks of “Machete movie moments”), I think that this should maybe have been left completely to the end of the movie because, this opening trailer tells us some important and spoilery things... one very quickly and then a bunch of stuff when you get into the last third of the movie.

The thing it ruins straight from the start is the fact that it reminds audiences the original Machete started off with a scene where he lost his partner. As you know from the previous movie, Machete’s new partner was also his new girlfriend, as played by Jessica Alba, a role this actress reprises here. However, since she isn’t in the trailer for Machete Kills Again... In Space, it doesn’t take much to figure out her character probably won’t make it until the end of this movie. Remembering that last film’s opening sequence on top of that, it’s not hard to realise she probably won’t even make it through the pre-credits sequence of this one before coming to a nasty end and... alas.... this is indeed what happens.

The other stuff you’ll realise, as you go through the movie, is that things are all pointing towards this one dovetailing straight into the next one. When Mel Gibson’s villanous Voz is shown to have a Star Wars fetish and intends to colonise the moon with his hand picked people and super-clones, much in the same way as the “off course” Bond film Moonraker did in the late seventies, you start to figure out where this is all going and, when he shows the silver mask worn in the Machete Kills Again... In Space trailer, you realise that this whole film is leading up to some kind of cliffhanger ending which takes Machete and the main villain careening into more mayhem in space... and that is also the correct conclusion.

For while Machete is clearly playing a more Bondian role in this one (he has his gadgets and knows how to use them... and is clearly a parallel here for “the many lives of John Shaft”... specifically the Shaft of Shaft In Africa) and the movie is quite blatant in its Moonraker references towards the end (with even some of the underscore sounding particularly late 70s Barryish at certain points)... it’s obvious that Machete Kills is Rodriguez saying to his Grindhouse audience... “Okay, so this is Machete’s version of The Empire Strikes Back.” And that is quite literal too... some parts of the sets are modelled on corridors and textures from Cloud City, Gibson has his own landspeeder and, after one of the regular Machete characters is blinded, Voz freezes her, encases her in carbonite and absconds with her in his spaceship.

Okay... so, this is all good and it certainly demonstrates the way films were getting high-jacked mid-production and turned into hastily changed science-fiction vehicles in the late 1970s. However, one of the things it has done, perhaps, is dilute down the already parodic Machete character into something else. It’s certainly a valid thing to do and it was very entertaining, but it was a bit more epic in scope than I wanted and a bit less punchy, I felt, than the first movie in the series.

Don’t get me wrong, it was fast paced as hell and the actors were all firmly committed to their tongue-in-cheek seventies roles, but I just didn’t have quite as much fun with it. That being said, however, there’s still a lot of laughs to go around and it brought a smile to this face on more than one occasion. It even had a follow up to the gory intestine joke of the previous film, which wasn’t quite as funny as the first but had a lot of people laughing. It’s very much a rip roaring time at the cinema and, what it lacks in the rawness of the first movie, it certainly makes up for in the sheer stupidity of its ideas... which includes flick knife smart phones, gatling gun bras, a miniature “strap-on” bazooka which shoots when you twerk, a helicopter blade ride with a difference and a 3D sex scene that will definitely leave you wanting more... especially as the print isn’t even in 3D, if you catch my drift.

Machete Kills is not quite the grimly humoured gore fest of the previous movie (although it certainly has its moments) but this shouldn’t stop the same audiences who liked the first movie from getting into this one... and with actors and actresses like Danny Trejo, Mel Gibson, Lady Gaga, Michelle Rodrigues, Amber Heard, Cuba Gooding Jr, Antonio Banderas, Charlie Sheen and even gory make-up legend Tom Savini, reprising the character he played in the first movie (but with a twist) going along for the ride... you’ll probably find something you’ll enjoy if you liked the first one. Definitely glad I saw this one and certainly looking forward to Machete Kills Again... In Space.
Posted by NUTS4R2 at 20:30